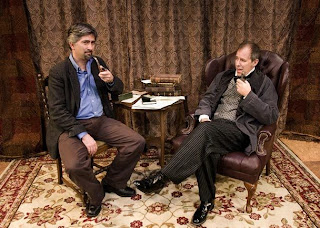 Misha Berson writing in The Seattle Times has a great article about the latest incarnations of the Immortal Sherlock Holmes, including my upcoming play Sherlock Holmes and the Case of the Christmas Carol.

You can read it here:

I agree with Misha: the new BBC series Sherlock is one to watch. Unlike the not-so-bad-when-you-think-how-bad-it-could-be Robert Downey Jr. film last year, the writers of the show pull off something wonderful: a completely faithful and relevant Holmes. That they can do this while transposing the characters to contemporary London is even more wonderful. (Though I'll confess: as much as I love the way London looks now, I get the occasional nostalgic yearning for a few hansom cabs and a pea-soup fog that the new show can't supply.)

But that's not to say that I'm not in constant ecstatic surprise at just how good Terry Edward Moore is going to be in the Taproot show. I sat in on a rehearsal on Saturday and it was an intense pleasure to see how the cast, led by Moore, has already mined more ore out of the script than I consciously knew was there. Lucky me, to have such wonderful actors and such a great company as Taproot willing to take a chance on a world premiere--a dodgy proposition in this economic climate, even for a Christmas show!

Happy Halloween, all. I'm spending mine providing a bowl of candy to trick-or-treaters and rereading a couple of my favorite stories from Conan Doyle's original--often imitated, never bettered.

(by the way, for more information on the Taproot show, go here: http://taproottheatre.org/holmes/).

Posted by John Longenbaugh at 6:09 PM No comments: 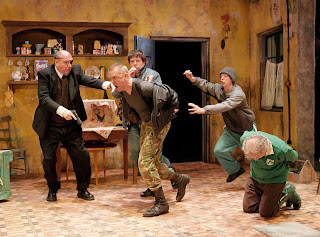 “It’s incidents like this does put tourists off Ireland.”

That’s Donny (drolly played by the habitually wonderful Sean G. Griffin) speaking to his friend Davey in his rundown cottage in rustic Inishmore, Ireland in The Lieutenant of Inishmore, currently playing at ACT till November 14. The incidents he’s referring to involve a catalog of horrors that begin with the death of a cat, and don’t end until said rustic cottage is strewn with blood and corpses—a conclusion that won't surprise anyone familiar with the writing of Martin McDonagh.

McDonagh’s reputation as a playwright was made through a series of plays set in rural Ireland, which he depicts as having a cultural life similar to how most Americans think of the Ozarks: the sticks, the backwoods, hillbilly country. Whether or not there’s any relation between McDonagh’s rural Ireland and reality is a subject of some debate, but there’s no question that his gleeful mix of lyrical dialogue with graphic violence has made him a name to be reckoned with.

His meteoric career as a playwright seems to have stalled slightly as of late. His most recent play A Behanding in Spokane, playing now on Broadway, is apparently an adequate vehicle for Christopher Walken, but critics have found it a thin excuse for some predictable violence. Like Tarantino (to whom he’s often compared), McDonagh seems trapped by his early success as a shockmeister.

While I have usually found McDonagh a morally bankrupt artist, he’s talented enough to do what any good playwright should be able to do: get your interest in the story, and hold it right to the end. We often talk of Grand Guignol as if any hack can pull off on-stage blood and guts, but the dramatic sense of how far you can go with your mayhem is a subtle craft. In certain works (Shakespeare's Titus Andronicus naturally comes to mind), scenes of torture, rape, murder and worse are used to illuminate actual truths of the human condition.

But that’s not this play.

Lieutenant is revenge tragedy as farce, where the death of psychopathic freelance terrorist Padraic’s pet cat leads to a tornado of death and mutilation. Shots are fired, humans (and cats) are killed, and what starts as a slovenly home devolves into an abattoir. But really, the structure of the play is no more sophisticated than an extended joke.

In McDonagh’s defense, this was an early play that was only dusted off and produced after the success of the superior Beauty Queen of Lenane and A Skull in Connemara, among others. As to its somewhat hyped “political commentary,” that’s pretty slim, mostly reduced to some caricatured names of IRS splinter groups that recall the “People’s Judean Front” scene from Monty Python’s Life of Brian.

For me the sole line in the play that carries some actual philosophical weight is when Mairead (Elise Hunt), sister of Davey and romantically inclined towards Padraic, says near the end of the play “I thought shooting fellas would be fun, but it’s not. It’s dull.”

Over drinks after the show with actor Jeffrey Frace (who plays Padraic), he mentioned to me that during a few months in Ireland back in 1989 the young people he spoke to on both sides of the religious divide echoed this thought: they were simply bored of the violence and wanted it to stop. I recall similar conversations with my Irish friends around the same time—the violence wasn’t just horrific, it was dull. The younger generation frankly had little interest or passion for its causes.

And this points to one pleasant aspect of this play: it’s already something of a museum piece. The most significant thing about The Lieutenant of Inishmore as a play is that we’re far enough away from the horrific violence of “the Troubles” that it’s possible to conceive laughing at it. And, perhaps, that there is indeed a way of dealing with terrorists: you don't declare an unending "War on Terror." You stop killing them, and you sit down and talk with them.

Posted by John Longenbaugh at 12:25 AM 3 comments: 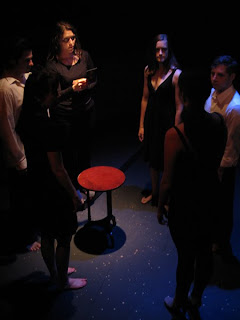 Arcana actor Brandon Ryan accosted me on Friday night after the performance. (He likes to accost people.) "You've been coming to this show too many times!", he said, before feigning a kidney punch and vanishing backstage. (He also likes to do this.)

It's probably true. I saw the show at least once a weekend during the run, and a couple of additional times too. I saw it both Friday and Saturday this week, trying to discreetly show up just before the curtain so I didn't look like one of those sad playwrights who shows up for ego stroking before his own show or to loudly clap and laugh during it. (Okay, I enjoyed a certain amount of ego stroking.)

While it was fascinating to watch the show develop, I got just as much of a kick out of watching the audience. One of the reasons I think people enjoyed this show so much was that the effect of eight individual pieces was particularly varied. They got a chance to laugh, to think some, and to hopefully feel something--and isn't that the definition of a Good Night Out?

Because the evening was such a smorgasbord, it led to some interesting reactions from the audience. Here's a short list of my favorites, either witnessed by me or related by others:

1) The man sitting in the front row during "The Picnic" with eyes fixed determinedly several inches above Katherine, who was sitting just a few feet away splendidly naked.

2) The man sitting in the front row during "The Picnic" who fell asleep several feet away from Katherine while she was sitting there naked. (To which I say--"Dude--maybe you found all 10 minutes of the play dull, but are you really that blase' about having a beautiful woman sitting naked eight feet away from you?") Weirdly enough, he was awake and laughing by the next piece.

3) The two women who sat next to me and started loudly sighing with dissatisfaction during the comedy of "Petting Sounds," and then gave exasperated shakes of their heads at the top of "Affairs with the Moon." They seemed personally affronted by the idea of the Moon talking, and left during intermission.

4) The man who told Anthony, one of the actors in the show, "Man, I loved that. It held my attention every minute. And that's amazing, because I have ADD."

5) The prim older couple who sat disapproving through the first twenty minutes of the show then exploded with guffaws when Brandon revealed just who that was on the tape he was listening to in "Petting Sounds," and were still giggling through till intermission.

6) The delighted smile of the pretty young woman who received a wave and a wink from the Moon.

7) The collective intake of breath the night that Katherine staggered back to sit in her chair in "Balance" and almost missed it, catching it at the last moment with a desperate grab of her fingers. (And then delivered the rest of the monologue the best I'd ever seen it done.)

8) The expectant attention every night as the lights started coming down on Anthony's Priest at the end of "Wild River," and the laughs that would explode when he contemplated the "hotness" quotient of his new boss and gave a small secretive smile.

Thanks to all--actors, artists, and audiences--for an amazing run.
Posted by John Longenbaugh at 2:34 PM 1 comment: