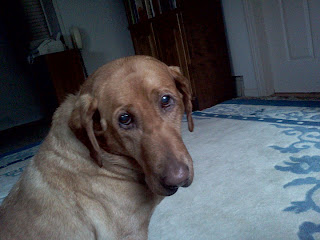 So I’m stepping aside from writing about theatre to write an appreciation of my Mom’s sweet dog Sadie, who passed away a couple of days ago. This won’t be a regular occurrence but she wasn’t a regular dog.

Sadie was a hound of unknown pedigree, but was immediately recognizable to anyone who’s ever seen one of James Thurber’s cartoons. She was the living embodiment of one of his many sad-eyed hounds, dogs that seem not just melancholy but beset by deep insecurities. Sadie’s constant demeanor was morose even when she was joyous and her tail was doing circles like a helicopter propeller.

Mom brought Sadie home from the Juneau pound almost ten years ago. I remember my sister saying that she really couldn’t understand my Mom’s choice—the dog was already grown, not much of a “looker,” and at that time anyway was given to heavy bouts of enthusiastic, and none-too-fragrant, panting. But when Mom brought her down to her book store, Sadie headed right to a back corner, curled up, and lay there through the long afternoon as various customers came in and enthused over her.

Sadie had, like Gertrude Stein (whom she somewhat resembled), a deep but passive love of company. She would look up when you came in the room, perhaps give a few thumps of her tail, and then wait to see what you were going to do. If that was skritching her ears and giving her some belly pats, she would lay back and give you a grateful look that made you feel like you weren’t just petting a dog, you were performing a useful community service.

Sadie wasn’t what I would have called a “fun” dog. On walks she could be awful, tugging on her leash, or when released, disappearing on lengthy secret missions. Walks with Mom would often include a long bout of her calling her name while we would periodically hear her romping about in the underbrush.

But Sadie was a dog with soul. I remember Mom saying when she got her that the vet had said she’d had puppies when she was younger—fate of said puppies unknown. It was easy to believe. Sadie seemed to carry some sad wisdom always about with her, even if it was just the burden of a tough past and the knowledge that in the present she had it good.

And she did have it good. Mom tends to spoil her pets—not to the point where they’re intolerable, but certainly to where they’re well aware that they have a good life. The dog got more than her share of table scraps and treats. Mom and Sadie used to do morning yoga together, Mom curling herself up with her feet in the air and the dog nibbling the treats that her mistress had placed between her toes.

When I last saw Sadie she was depressed about Mom’s absence—Mom was off on her annual book-buying and cartographer conference trip to England and the Continent, while I looked after the house and dog, and went through the vast number of books I have stored in her basement. Yet after a few days Sadie cheered up to the point where she would actually play with me in a melancholy sort of way—she’s bring me one of her stuffed animals, I’d throw it, and she’d look at me reproachfully, as if to say “is that how you treat my toys?”

This last week Sadie got out of Mom’s house late at night and went rummaging. Unfortunately the poor old girl ended up with a fatal case of garbage gut—she’d never been the most discriminating of dogs—and though she received surgery she didn’t survive it. Though she was getting stiff and was easily satisfied with a short walk and a full dog bowl twice a day, she still had a few good years left, and it’s very sad to lose her. She lived an odd and seemingly melancholy life. But she had the pleasure of being loved by a lot of people—and that’s a considerable accomplishment for a lifetime.

Posted by John Longenbaugh at 1:29 AM No comments: