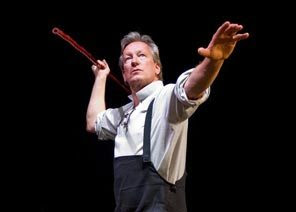 On Sunday night I had a friend in from out of town and we caught a preview at the Rep of "Of Mice and Men." It was grand seeing so many friends up on the stage tearing the hell through one of the undisputed masterworks of American theatre, and it was even more fun catching up with them at drinks afterward at Solo, which has become one of Seattle's Actor Bars. (I hope they know what they're in for!)

My old friend Charles Leggett, who as Lenny had spent the evening politely tugging the entire production away from his fellow actors, had some choice comments on the process of creating his role and I'm looking forward to seeing how audiences respond to the show.

Actors and artists in Seattle are given to the occasional rant about their status in the local theatre ecosystem, and this evening it was the turn of Mr. Basil Harris to take the floor. Basil, who I chiefly know from his days in sketch comedy troupe Bald Face Lie, was fresh from closing his own show "Go Dog, Go!" at the Seattle Children's Theatre, and I suspect a combination of closing night euphoria and whatever he was drinking were what led to his passionate rant about the necessity of local artists to actively pursue their own destinies. He enumerated the well-known reasons for why NOT to be an actor, and then said "really, the only reason to continue doing this is to be part of this community. The only 'career' you end up with in theatre is entirely based on working with your peers and colleagues. It's not about getting larger and larger roles until you're suddenly a star. It doesn't work like that in this town. The pay-off, the success, is the opportunity to do the work, and to do it with people who you respect."

Basil's comments have been going through my head today as I read the many tributes to actor Mark Chamberlin, who died unexpectedly this morning after a bike accident on the weekend. I knew Mark only slightly off the stage but had been watching his performances for years. I always carried a small amount of guilt that the first show I'd seen him in, Hospitality at the old ACT, was frankly atrocious and my review said so. (He played a crack-smoking corrupt Immigration officer. I doubt it was his favorite role either.) Whatever; when we last talked, at the opening night of "The Odyssey" at Taproot, it was again clear that he wasn't carrying any ill-feeling about my unkind words of 15 years ago.

Regardless of how little we actually knew each other, Mark and I were both members of an artistic community that's still small enough to consider itself family--albeit the sort of loud, cantankerous and argumentative extended family that spends as much time feuding as celebrating. I feel honored to have seen so many of his performances over the years. He brought a quality of substance to his work that's rare. The eye was naturally drawn to his slightly craggy good looks, the ear to a voice--what a voice!--that he used like a musician his instrument or a carpenter his toolbox.

Thanks for your work, Mr. Chamberlin. I'm sorry we never had a chance to work together, because you were the sort of artist I aspire to collaborate with. We were distant relations but family nonetheless, and I join the rest of Seattle's artists in mourning your loss.
Posted by John Longenbaugh at 1:00 PM 1 comment:

"A Highly Developed Set of Ethics" 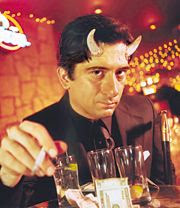 I was once fired from a job—long ago, I might add. During our exit interview, I asked the reasons for my dismissal. After waffling around about this and that (the truth was a higher-up just didn’t like me), my new boss said, in a frustrated tone, “let’s just say you have a highly developed set of ethics.”

I was a theatre critic for The Seattle Weekly and Backstage Magazine from 1995-2000. I really don’t miss it all that much. Poorly paid, flattered by some artists and hated by others, a punch-line to half the theatre jokes out there, being a critic had few positive aspects aside from the free tickets. But I do actually miss working in a profession with some ethics. Aside from don’t punch your co-workers and don’t steal from the petty cash, a lot of jobs out there really don’t have a professional code of conduct. Theatre criticism has a whole host of rules, formal and informal, that a critic is supposed to follow—particularly if, like me, you’re also simultaneously a theatre artist.

While some of these rules came from my editors, others I developed on my own. Here’s a few of them:

But the greatest ethical requirement of a critic is that she or he gives a truthful reaction to what they’ve just seen. If you love it, even if you personally dislike the playwright, you praise it. And if you hate it, even if the company is a wonderful group of artists who’ve flattered you and bought you drinks, you say so.

One of the phone calls I treasure most during my time as a critic was from Kevin Joyce, who at the time was still with UMO Ensemble. Despite this being one of my favorite theatre companies ever, I’d just given their latest show a lacerating review. He told me that he’d just read the review, completely agreed with it, and thanked me.

Theatre artists give critics a lot of stick, mostly because we fear their opinion of our work and the effect that might have. But while theatre criticism might not necessarily be an art, it is an ethical profession. So to every critic out there who takes ethics seriously: thank you. Even if I disagree with your opinion, particularly of my work, I respect you working a job that asks you to behave in a morally responsible way. It’s not always easy hanging onto a set of ethics in the modern world.

Posted by John Longenbaugh at 2:11 PM No comments: